Washington Commanders’ Defensive Coordinator, Jack Del Rio, is under fire for comments he made regarding the January 6th insurrection on the Capital back in 2021. It all started on Tuesday, when Del Rio responded to a tweet regarding the upcoming January 6th Committee hearings. 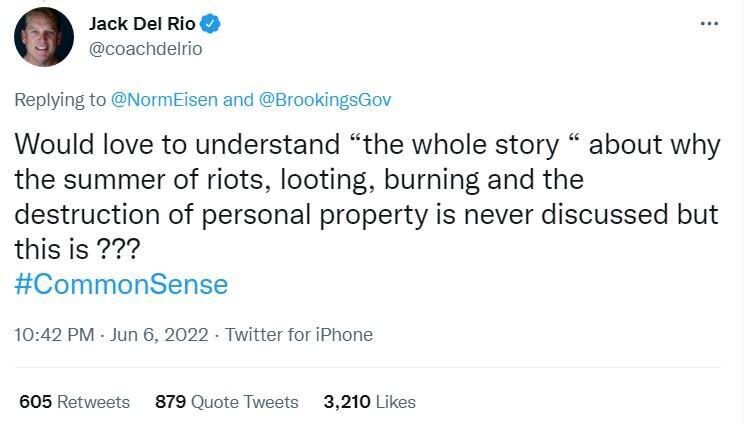 The “summer of riots, looting, burning, and destruction of personal property” Del Rio was referring to was presumed to be referencing the protests that came following the death of George Floyd. Del Rio confirmed these suspicions the next day, and even doubled down on his stance in a previously-scheduled press conference.

“Let’s get right down to it,” Del Rio said, via NBC4. “What did I ask? A simple question. Why are we not looking into those things, if we’re gonna talk about [January 6], why are we not looking into those things? Because it’s kind of hard for me to say, I can realistically look at it, I see the images on TV, people’s livelihoods are being destroyed. Businesses are being burned down. No problem. And then we have a dustup at the Capitol, nothing burned down. And we’re gonna make that a major deal.”

But that’s just how the game is played.

One side undersells one thing while the other side undersells another–all in an attempt to provide a distraction for the thing you’d rather not acknowledge. Did some of the protests following George Floyd’s murder boil over and result in looting, vandalism, and arsonry? Yes. But was it all just swept under the rug and forgotten, as Del Rio implies? No.

Over 14,000 arrests were made across the country during the protests following the George Floyd case. That doesn’t sound like “No problem” to me.

What does sound like a problem, though, is almost 10,000 people storming the nation's capital in an attempt to take it over. Del Rio must of noticed this–or at least noticed his job may have been put in jeopardy–and released an apology on twitter the next day.

“I made comments earlier today in referencing the attack that took place on the United States Capitol on January 6, 2021. Referencing that situation as a dust-up was irresponsible and negligent and I am sorry. I stand by my comments condemning violence in communities across the country. I say that while also expressing my support as an American citizen for peaceful protest in our country. I have fully supported all peaceful protests in America. I love, respect, and support all my fellow coaches, players, and staff that I work with and respect their views and opinions.”

Ron Rivera, the Commanders Head Coach, has yet to comment on the situation. The newly named Commanders are set to kick-0ff their 2022 season with a Week One game at home, against the Jacksonville Jaguars. If you want to bet on the upcoming NFL season, be sure to check out any of the available Pennsylvania Online Casinos.