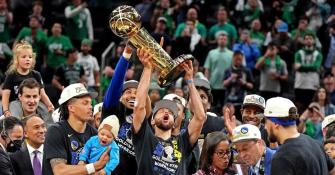 So, last night was fun, huh? Well, not if you were a Celtics fan. Sorry, fellas and ladies.

But there’s good news, Bostonians. The way-too-early but latest odds suggest your boys in green could be back in the NBA Finals a year from now in a rematch with the Warriors.

As you may have heard, Golden State won its fourth title in eight years Thursday night by silencing the Celts on their home floor.

That should be incredibly motivating for Boston next season – and oddsmakers agree.

While some sites (BetMGM and other Online Sports Betting Apps) have the Warriors as slight favorites (+500 to +550) to win it all again, DraftKings lists it as a dead heat – among four teams.

Yeah, you read that right.

Golden State and Boston make the most sense, clearly, but Brooklyn and the other L.A. team?

It’s always risky making a future bet a year in advance and who the hell knows what’s going to happen with the Nets and Clips this offseason.

Clippers owner Steve Balmer craves a championship team and his crew may be working on a pre-draft deal (which happens next Thursday, June 23) that may make them the new favorite.

But it’s the same as it ever was with those two teams: The talent is there but can each stay healthy and focused (looking at Simmons, Kyrie, Kawhi and PG) and will all of those pieces even remain? Durant should be dynamite but the others … beats me.

And what to make of the Bucks (+750) and the Suns (+900), the two NBA finalists from 2021? The Bucks look like good bang for the buck, especially since Giannis Sina Ugo Antetokounmpo (full birthname, people) will be hungry as ever to lead Milwaukee back to the promised land.

Not sure about the Suns. Chris Paul looks like he’s running out of gas in the Valley.

In closing, unless you’re in love with a team’s odds, probably best to wait until things shake out between now and the NBA Draft and maybe all the way until the first preseason game.

However, fortune favors the bold. Correct? So go for it now.

Jon Jones’ Return To The Octagon May Happen Sooner Than Later: But Who Will He Face?

Here's How To Get Free Chumba Casino Sweeps Cash