Best MLB Live Betting Guide (2022) Learn how to bet like a pro with this in-game betting guide! 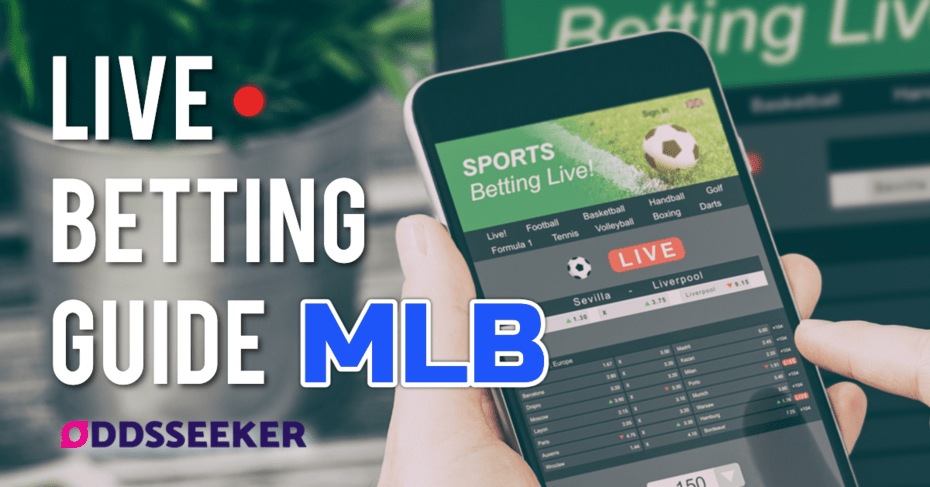 Baseball, hands down, is one of the most unique sports available to fans. There are many elements that set aside baseball from other major sports. The most significant difference with the sport is that there is no time constraint or game clock involved. Also, MLB has the longest regular-season length with each team playing 162 games. It is almost always on, where each team plays a game almost every day.


Baseball is perfect for in-game betting because technically, at any point during the game, regardless of the score and how improbable it is, there is a physical and mathematical probability of a comeback.

Additionally, pre-game lines are based on the game’s starting pitchers, but chances are each team is going to their bullpen at some point during the game. In-play betting on MLB permits you to observe changes on the bullpen before placing a bet.

The most popular in-play markets for baseball are as follows:

Game lines (ML, Run Line, Totals) are usually a better fit for our live betting strategy as they tend to involve less risk. When you bet on an inning line, you don’t have redemption if your bet is losing at the end of the inning. On the other hand, when you bet money line and your team goes down at any point during the game, your bet still has a chance to win as the situation can change in the upcoming innings.

Baseball is all about statistics and consists of nine innings of math and data over 162 games per team per year. You have an abundance of player and team stats available to you before each game to come to a conclusion on which teams or players are having a better season compared to others.
Knowing batting averages, home runs, rbi, stolen bases, runs scored, ERA, wins, strikeouts and other readily available stats will give you an invaluable advantage while live betting on MLB.

How to Assess Momentum in MLB

In baseball “No Comeback is impossible” and this is not a figure of speech. When during a sporting contest, there is the slightest physical or mathematical probability for the losing team to come back, momentum can come into play and re-ignite a fire at any point throughout a game.

Usually, in baseball momentum takes the shape of a strong defensive play that gets you out of a stressful situation with multiple bases loaded. If at the bottom of the 9th inning, a team gets into a situation where they are face to face with a loss and manages to get out of it, momentum will definitely shift on their side. This is where we, as the live betting experts swoop in and steal the win!

On the contrary, if a team blows some easy saves, extending the inning, which would have been over if it wasn’t for the error, the momentum is passed to the attacking team.

How to Read Live Odds in MLB

Remember that, when you are looking at pre-game odds on MLB, they are based on the game's expected starting pitchers. Which makes sense as hot pitching is equivalent to a solid bet. But it is more than likely that each team is going to go to their bullpen at some point during the game, making the pre-game lines almost irrelevant.

Another important note to make is, the home team advantage is captured within the odds during the latter stages of a game. Disregarding the home team advantage when analyzing odds in baseball might be misleading, as you could come to a faulty conclusion that the odds are favoring the home team due to them being the better team. Not having a redemption at the bottom of the 9th inning is a significant disadvantage for the away team and the sportsbooks make sure this is reflected on the money lines.

Baseball’s uniqueness makes it hard for it to be formalized on a scenario-based approach and generalize it in a way that applies to multiple games. Each baseball game is unique, and it is hard to say there is a particular type of match, contrary to a sport like soccer where you can classify similar games or score lines (e.g., games that end 0-0).

Instead of scenarios to bet on, we should concentrate on similar situations that may appear during the games.
The 9th inning of a tied or a close game is always a thriller to watch and is a great point to bet during the game. Forgone opportunities to score runs or errors leading to concede runs could be costly for teams at the final stages of a game. If you come across one of these situations where the attacking or defending team rues an opportunity, you should automatically back up the opponent.
It doesn’t have to be only errors! Sometimes amazing defensive plays or great pitching at a crucial point during the game can indicate the outcome too. Always lookout for these indicators to decide on which team to pick during a live event.

MLB Betting Should be a Volume Game

With baseball, your bets, are never 100% guaranteed at any time during a game. Your team could be up by 7 runs in the bottom of the 9th with 2 outs and opponents’ worst hitter at the plate and there is still a chance you can lose. This is a scary reality of the game of baseball and should teach you that it is never a good idea to wager a large amount of your money into one single game.

Live sports betting could be a valuable tool for an additional revenue stream if it’s backed by the right strategy. Make sure to keep in mind the 5 concepts we have introduced here on a general level, and tailor your approach according to each sport’s unique characteristics to get the best value out of it.