6 Charts You Need To See Before Betting NFL Preseason Odds

The NFL preseason is full of hope. Thanks to the league's long-standing push for parity, fans of nearly every team can kick the year off with playoff expectations and Super Bowl dreams. Last season was particularly parity-friendly, as 28 of the NFL's 32 teams were mathematically alive for the playoffs with four weeks remaining in the regular season.

A high level of parity doesn't stop oddsmakers from setting up preseason betting lines, though. Gamblers can drop cash on preseason Super Bowl odds or take a stab at betting on win-loss over/unders. And, as it turns out, the preseason betting picture may often be a harbinger of things to come.

So what does the data say about the 2022 season's Buffalo Bills or Tampa Buccaneers, early favorites to win the next Super Bowl? Keep reading to take a historical deep dive into Super Bowl favorites, long shots, and win-loss over/unders and get a sense of what the data might mean for this season—and seasons to come. 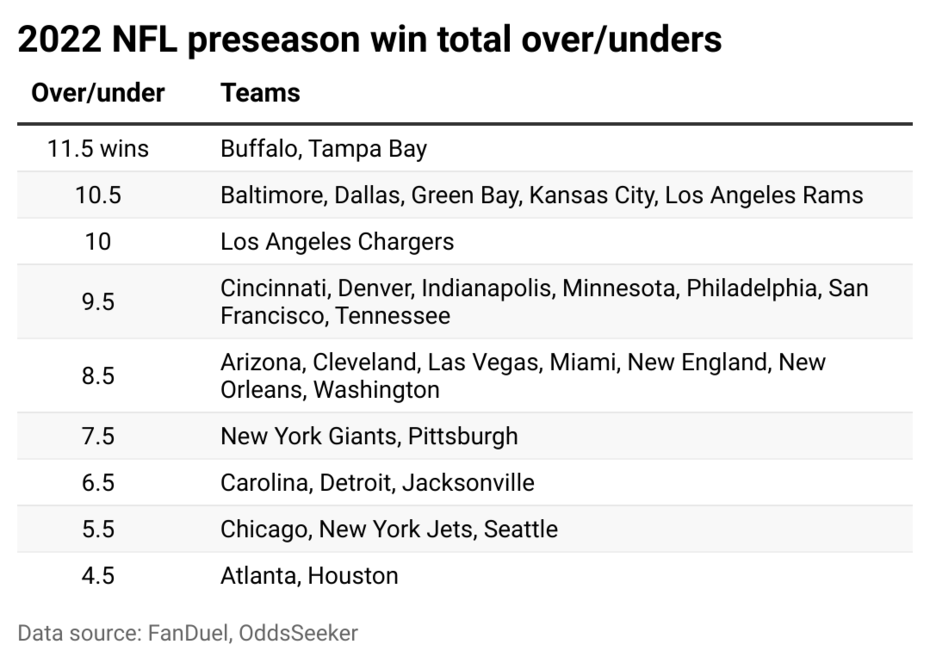 Lines from FanDuel put Bills and Buccaneers at most wins

When looking at win total over/unders from FanDuel for the upcoming 2022 season, the Tampa Bay Buccaneers and Buffalo Bills are favored the best with lines of 11.5. The Los Angeles Rams, the defending Super Bowl champions, are among a group of five teams with an over/under of 10.5 wins. Last season's AFC champions, the Cincinnati Bengals, sit marked with a 9.5 over/under.

On the opposite end of the spectrum, the Atlanta Falcons and Houston Texans are both rated the worst at 4.5 wins each. The Texans last passed the four-win mark in 2019 while the Falcons have won seven games for three of the past four seasons. 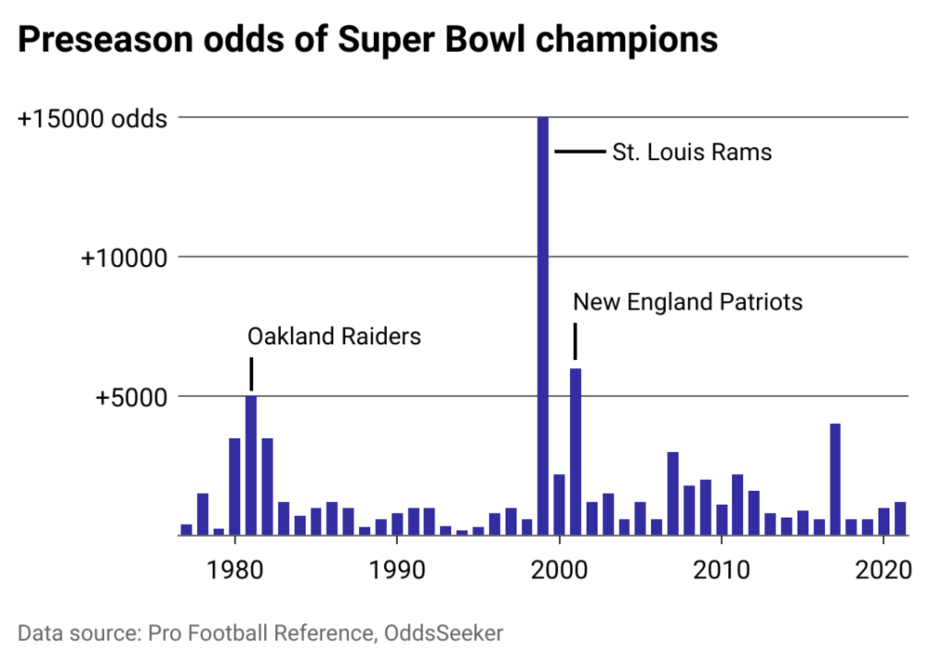 Generally, the eventual Super Bowl champion enters the season with favorable odds at online sports betting sites. Thirty-three of the 45 champions since 1977 had preseason odds of 15-1 or better and in the past 10 seasons, seven have had odds of 10-1 or better. There are a few exceptions, though.

Most notably, the 1999 St. Louis Rams won the Super Bowl despite receiving preseason odds of 150-1. "The Greatest Show on Turf" was led by then-little-known quarterback Kurt Warner, running back Marshall Faulk, and an electrifying receiving corps spearheaded by Isaac Bruce and Torry Holt. With a 4-12 record the season prior and no proven quarterback at the helm, it's unsurprising that oddsmakers and bettors placed little hope on the Rams in 1999.

Other longer-shot champions include the first New England Patriots Super Bowl team in 2001 and the Oakland Raiders in 1981. More recently, the Philadelphia Eagles received 40-1 odds in 2017 before eventually winning the title. 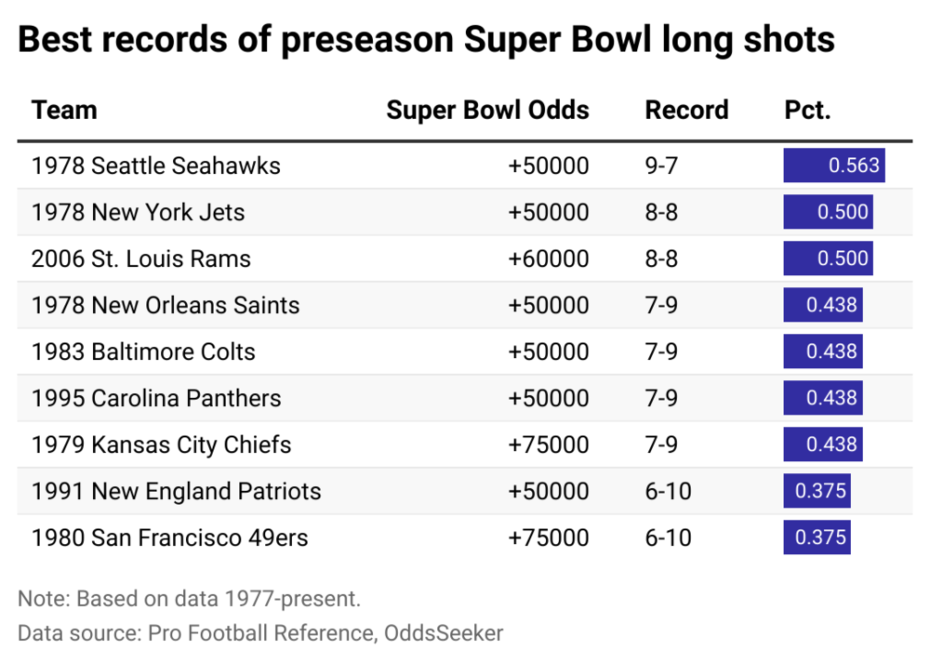 With most Super Bowl champions starting the season with good odds, it makes sense that the flip side would be true: Teams with bad preseason Super Bowl odds often have bad seasons. Per the data, that's usually the case.

Out of the 21 teams tabbed with 500-1 preseason Super Bowl odds or worse since 1977, just one—the 1978 Seattle Seahawks—finished with a winning record. That season also happens to be the first winning season ever for the Seahawks, a franchise just three years old at the time. 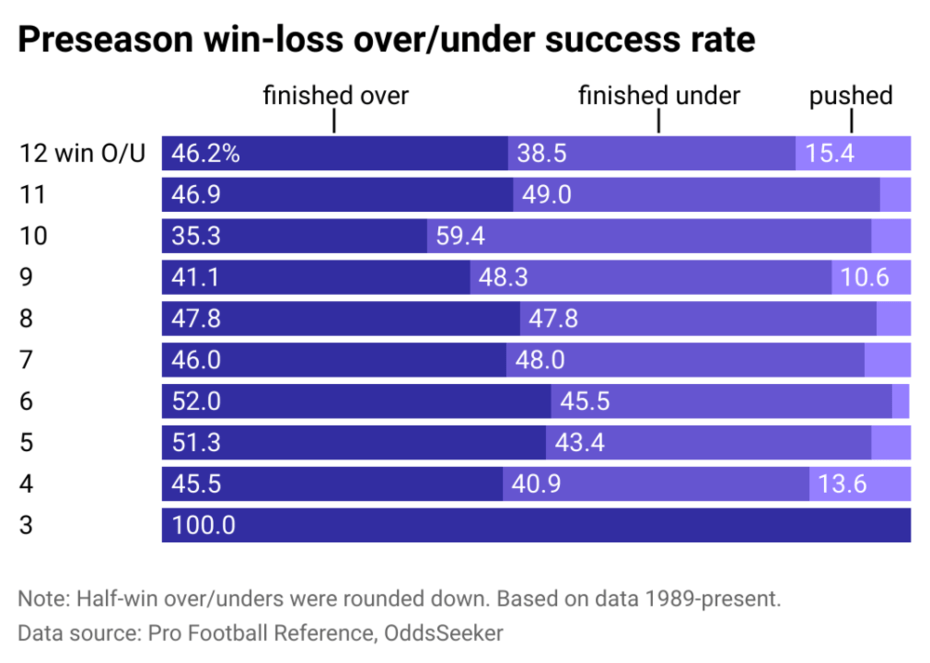 When looking at preseason over/unders for win totals, a few trends stand out. First, teams listed with an over/under of 10 wins only break the threshold 35.3% of the time, well below the overall 45.4% average. It's possible that oddsmakers default to a 10-win over/under for generally perceived "decent" teams.

Next, six- and five-win over/under teams have the best success of going over at 52% and 51.3% over rates, respectively. As such, these teams are likely undervalued the most by oddsmakers and bettors in the preseason.

Finally, it's not a huge sample size, but all three teams listed with a three-win over/under in preseason have gone over that threshold. The three teams: the 2017 Jets and the 1995 expansion franchises of Carolina and Jacksonville. 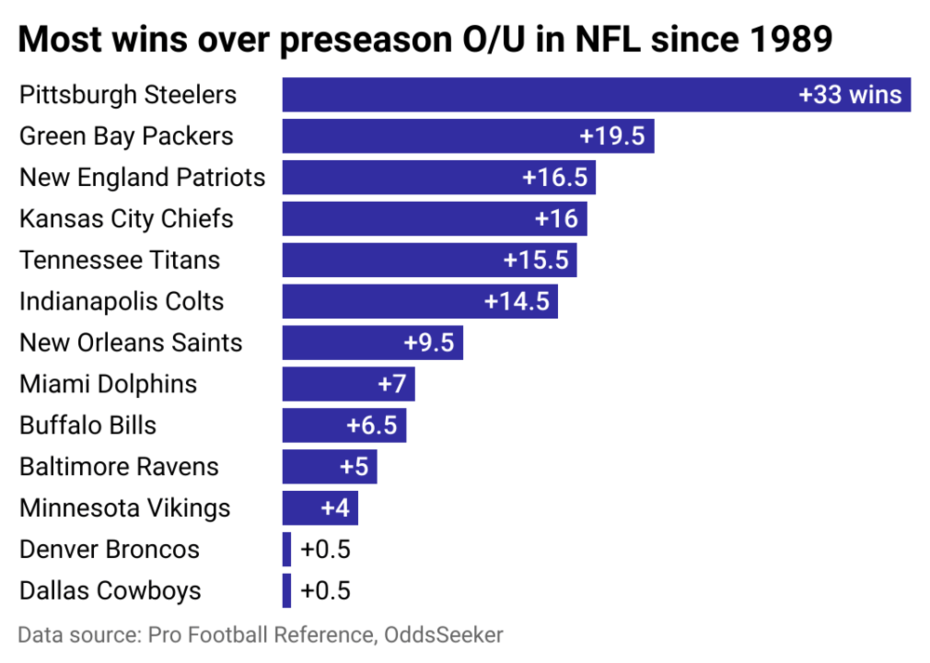 Pittsburgh has done the best against preseason win-loss over/unders

For franchises with the most success against preseason win-loss over/unders, no one rivals the Pittsburgh Steelers. At plus-33 wins against preseason over/unders since 1989, the franchise is nearly one whole season better than the runner-up, Green Bay. With the Pennsylvania sports betting market running at full steam, this is good news for Steelers fans looking to bet on their home team.

Pittsburgh has also beaten its preseason win-loss over/under 22 times in the 34 seasons that Pro Football Reference has preseason odds data for.

The Steelers also (jointly) hold the record for most games over a single season over/under. In 2004, Pittsburgh's 15-1 team beat the allotted win-loss over/under by 7.5 games. Two other teams—the 2004 San Diego Chargers and the aforementioned 1999 Rams—also beat their over/unders by 7.5 games. 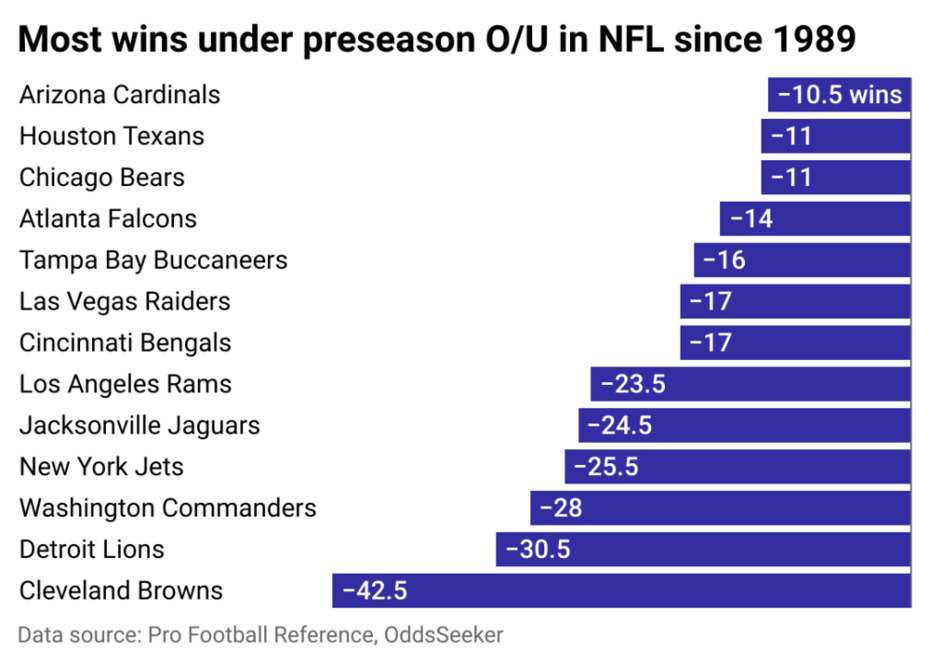 Cleveland has struggled the most against preseason win-loss over/unders

The least successful franchise against the preseason win-loss over/under is Pittsburgh's longtime AFC North and prior AFC Central division rival, Cleveland. The Cleveland Browns have beaten their preseason over/under just nine times in 31 seasons of play since 1989—no other team in the league has posted such a lowly mark. Ohio sportsbooks should offer odds boosts so more bettors can get in the action betting with their team than against.

The worst single season against a preseason win-loss over/under win total was achieved by the 2013 Houston Texans. That Texans team notably started the year with a pair of victories before losing 14 consecutive games to close out the season, ultimately finishing 2-14 and eight wins shy of their 10-win over/under line. The lofty preseason prospects came after Houston had just won back-to-back AFC South titles and was coming off a franchise-best 12-4 season.

Ultimately, the preseason over/under for wins appears largely conservative in its projections. Franchises that have seen consistent success all around—such as Pittsburgh, Green Bay, and New England—have generally beaten their over/unders. Meanwhile, less successful teams struggle at beating their over/under. It makes sense; oddsmakers are less inclined to set bold win-loss over/unders and instead set middling lines that represent the inclinations of the average bettor.

Everything You Need To Know About Formula 1

NFL MVP Betting Odds: Hurt's Will It If You Don’t Take This Long Shot Bet

By Ty Bronicel
Last Updated: Jan 25th 2023
Share with your friends and family